What is the Ancient monument near Camp Icarus

===========
Arets not tameable but more Monria pets are added… and old ones may get changed so that they have to be level 7 to export?

i wondered for a long time where i should put a Generalists Log so i asked John Capital about it. He said that the best place to put it might be the General Economy Discussion.

So here we go, this is what i do ingame

1. mining (both ore and enmatter)
2. hunting (focus:Araneatrox, Atrox, Argonauts and occasional Daspletor hunts and i promise to do some sochunts with my socm8s from now on, who call me Peter Parker already, because i am only hanging out with the spiders)
3. Mindforce runs (skilling pyro on Daikiba) and
4. crafting (Basic screws for metal res, Simple I Plastic Ruds, UR125)
5. Trading as much as possible

I will log peds spent vs tt and MU i got back and will post pics of the highlights. And total in profits/losses.
I will give some comments why i stay with or switch professions.
Once a month i will count skills…

The reason why i want to make a generalists log is because i am back to an almost empty pedcard. Last night my losses crossed the -15k mark since the big spider hit in last decembre. I will not be able to grind spiders every day anymore unless i hit big again. I will have to change back to the Generalist Survival Game i played for many years to earn my peds. But given the fact that i am 80 spiders short of completing the 5k Araneatrox quest, I WILL NOT GIVE UP!

There are several goals id like to achieve, but my focus will stay on finishing the spider quest! Since there are not enough ped on my card left to continue this, i will start out with an enmatter mining run of 3x MA103.

– bumping up this one again since it’s very useful with Compets Game on Windows. Figure since the first payout happened not long ago, more may be playing these days. I know I have been recently. Unfortunately this little trick doesn’t work for Entropia, but it does for games like Compet!

(makes it nice to have both EU and compet open in seperate windows on same monitor, so you can be subscribed to the arena while also doing Entropia stuff in the mean time… )

Hello, I’d like to report a bug with the enigma puzzle.

I made one attempt, and it exploded and I died.

I then tried to go through the red door, which also killed me.

Then I managed to step on every square with out it exploding, and the exit was unlocked for me. I suspect this is a bug somehow…. 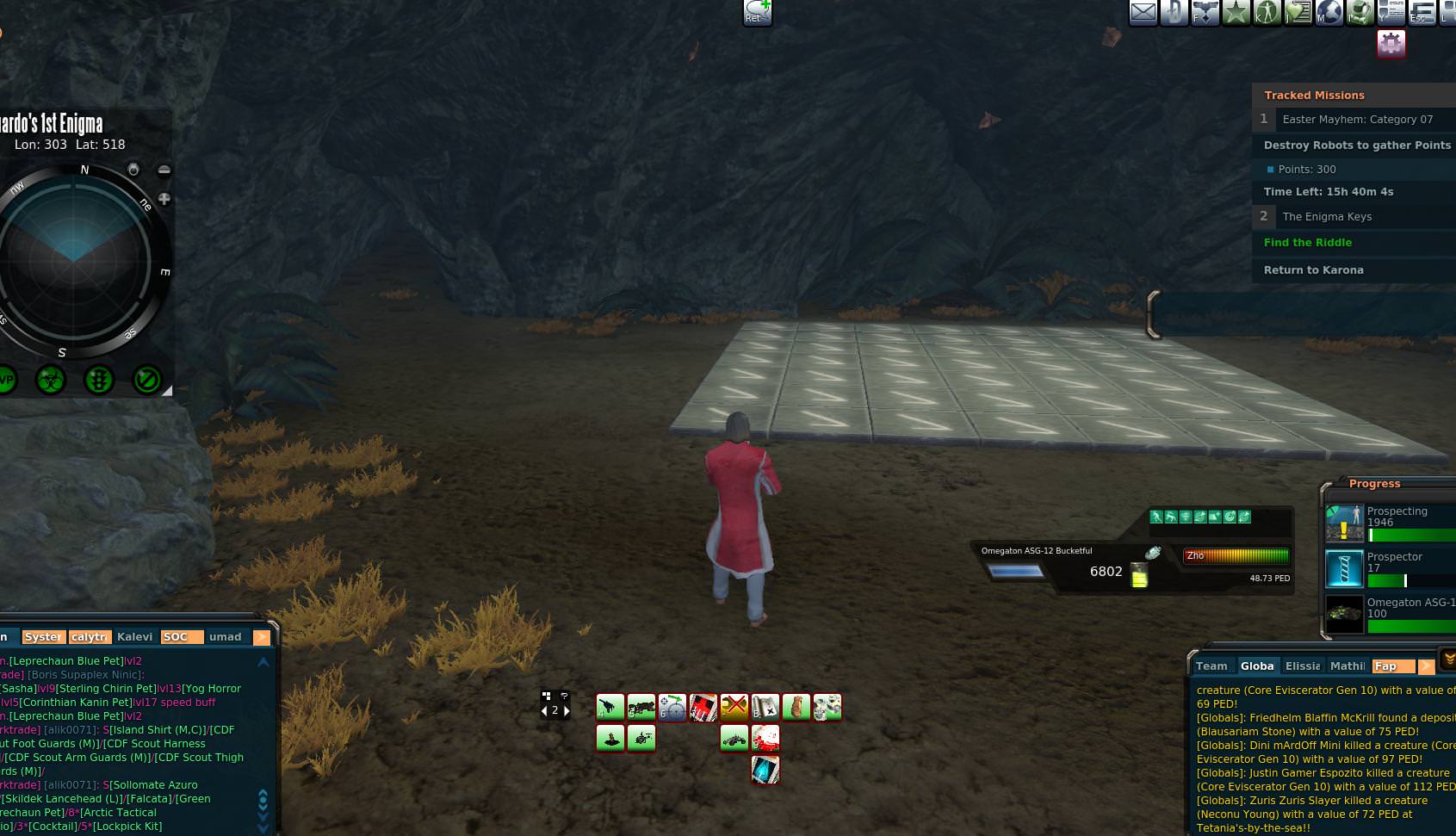 Edit: Just as an aside, not sure if it is related, but after i died due to explosion, one of the squares were still lit while all the other ones had dimmed, not sure if this is related.